Analyzing the SOS calls at our office, we can say that hundreds of migrant women domestic workers are subjected to wage theft and exploitation in all the Gulf Cooperation Council (GCC) countries and Lebanon, says a CSO head in Dhaka 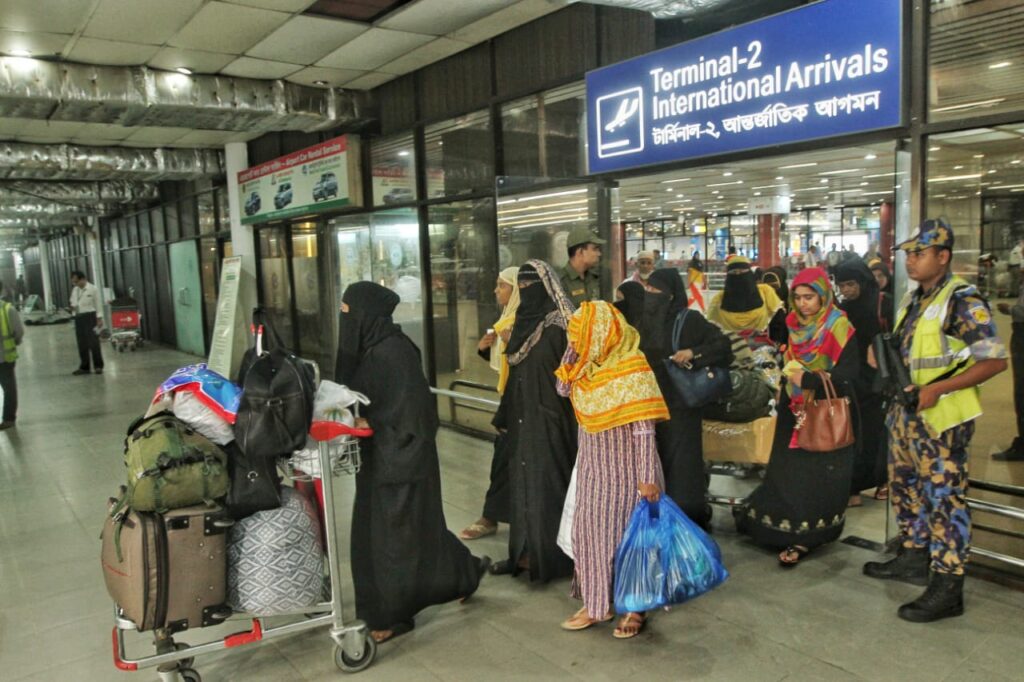 Unfortunately, she had to return to her home at Narayanganj in Central Bangladesh, empty-handed.

Riya claims that her employer hasn’t paid her 10 months’ salary, which is around USD2700.

“I had a valid labour card only for the first two years. After that, the employer who is a police officer didn’t renew it. As I didn’t have a valid labour card, I wasn’t in a position to claim the unpaid wages. My fate,” Riya said.

According to Riya, her employer wasn’t paying at the end of every month.

In addition to the denial of wages, she was subjected to exploitative working conditions too.

“I had to start working from the early morning and it would continue up to midnight every day. Most of the days, I wasn’t getting enough time to sleep too. There were 10 rooms in the house and five members. Even the two boys, aged 11 and 12, used to hit me,” she said.

She returned with the help of Bangladeshi embassy in Saudi Arabia.

Riya had migrated to Saudi Arabia in 2016 through an agency after spending USD700 as a recruitment fee.

Now, she has approached Bangladeshi Ovhibashi Mohila Sramik Association (BOMSA), a Dhaka-based migrant rights, to approach the government to know whether she can fight the case to claim her lost wages.

If Riya had lost 10 months’ wages, Rokeya Khatu, a 45-year-old woman migrant domestic worker, had to return from Lebanon after giving up her 19 months’ wages, which is around USD3800.

She had worked in Lebanon for 11 years, out of which she was undocumented for five years.

“I don’t know what to do now. I have three young children to take care of. My husband is paralyzed and is bedridden for 17 years. I had paid around USD1,000 to an agent in my Pakundia town in Kishoreganj. Still, there are loans. I am clueless on how to clear them,” she said.

According to BOMSA general secretary Sheikh Rumana, 36 women migrants have returned during the last three months and 95 in 2020 after being subjected to wage theft and exploitation.

“Analyzing the SOS calls at our office, we can say that hundreds of migrant women domestic workers are subjected to wage theft and exploitation in all the Gulf Cooperation Council (GCC) countries and Lebanon,” Rumana said.

Over 400,000 Bangladeshi migrants have returned home amid the COVID-19 pandemic since April 2020, according to official data of the Bangladesh government.

Of them 350,000 were male and 50,000 were female migrant workers who were forced to come back home. Many of the returned migrants complained that they were either denied wages of several months or were underpaid at the destination countries.

When asked about the steps adopted by the Bangladesh government to fix the wage theft issues, Expatriates’ Welfare and Overseas Employment (EWOE) Ministry’s Secretary Dr. Ahmed Munirus Saleheen said that they are trying to get reports on “wage theft”.

“We are working closely with our diplomatic missions abroad to understand the issue and thinking of ways to protect our migrant workers in the destination countries,” he said.

However, Munirus Saleheen, a senior official of the EWOE ministry, said that it would be difficult to retrieve migrants’ unpaid wages from individual employers.

“It is hard,” the official said.

Meanwhile, Bangladesh Parliamentarians’ Caucus on Migration and Development Secretary-General Mahjabeen Khaleed said that the government should take the wage theft issue seriously because it has been an important issue in this COVID-19 time.

“I understand that the Philippine government has taken some practical steps to help migrant workers to claim their unpaid wages. We should see those steps and try to implement the same for our Bangladeshi migrants too,” he said.

Mahjabeen Khaled, a former parliamentarian, said that “our missions abroad need to look into this wage theft issue seriously.”

(Md Owasim Uddin Bhuyan is a Dhaka-based journalist contributing for MFA. The story was edited by Rejimon Kuttappan.)