MIGRANT FORUM IN ASIA (MFA) believes that migrants’ rights are human rights. Documented or undocumented, irrespective of race, gender, class, age and religious belief, migrant workers’ rights are guaranteed by the UN Declaration of Human Rights, the UN Convention on the Protection of Rights of All Migrant Workers and Members of their Families and other international conventions.

Migration in the age of information technology has become a matter of trade and commerce. People migrate not out of whim or to afford “better” things in life but as a means of survival. On many occasions, migration carries a woman’s face.

Indeed while the 20th century ushered a kind of development that has transformed the world into one global village, it is not without dreadful consequences. Transborder transfer of capital to less developed countries (LDCs) has not improved the lives of the improvised majority. Countries mired in foreign debt are then pressured into adopting a policy of exporting millions of workers to stem the tide of massive unemployment and to bail out the local economy from complete bankruptcy. Women too, are joining the workforce, not as a result of policies promoting gender equity but often as a measure to support their families. Migration has become a necessity rather than as a matter of choice.

In the course of employment, they are often subjected to contract violations, abuse and exploitation.

Migrant workers also experience subtle and overt acts of discrimination and xenophobia based on the intersection of race, class, gender and religious beliefs.

The vicious cycle of dehumanization rolls along the path of migration. The 20th century calls for a meaningful change which has come to be enshrined in the 1990 UN Convention on “The Protection of All Migrant Workers and Members of Their Families,” which came into force as international law on the 1st of July 2003. In advocating for change, the Migrant Forum in Asia (MFA) is committed to a process of social, political, cultural and economic development that responds to the promotion and protection of the rights of migrant workers and members of their families. 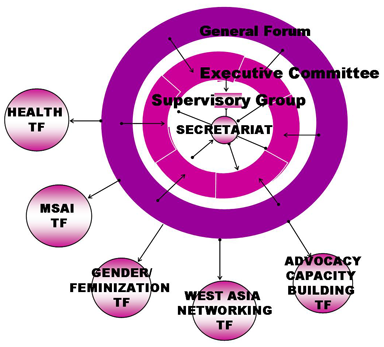 As a network working to address migrants’ issues, we commit ourselves to: 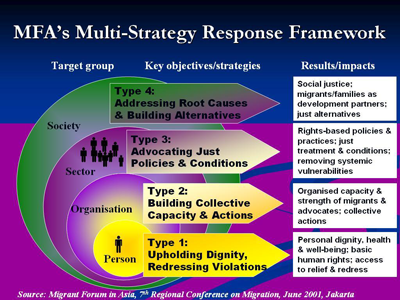