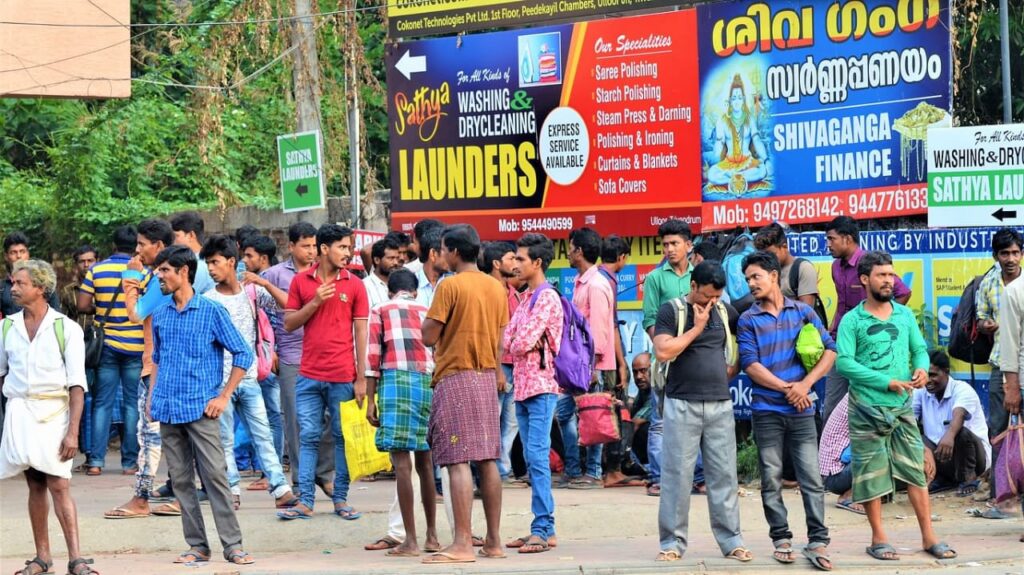 Nibir Sanjan, a 35-year-old migrant construction in Ernakulam, a central Kerala town in India, has purchased a train ticket to his home in Assam, which is some 3,300km far.

“The landlord is forcing me to vacate the room as COVID-19 cases are going up here in the city. Additionally, for the last three weeks, there is no much work too. So, it’s quite hard to stay back. So, I have decided to return,” Nibir, who is one of the 3.4 million internal migrants in Kerala, said.

Kerala is witnessing a high number of cases since this April, with a test positivity rate crossing 22.1 percent. So far, 5,138 Keralites have died due to COVID-19 with 232,812 active cases when this report was filed.

Meanwhile, in Ernakulam, where Nibir works, during the last week, more than 25,000 COVID-19 positive cases were reported. And as of Monday, there were around 82,011 under observation in Ernakulam, out of which some 79,000 are at home isolation.

Currently, there are 37,494 active cases in Ernakulam and the test positivity rate is 21 percent, one of the worst in Kerala.

The scary test positivity rate (TPR) in Ernakulam, which has a high density of migrant workers, has forced the administration to lock down certain areas and impose strict restrictions on April 25 like regulating shop timings, shutting down cinema halls, and gymnasiums and limiting the number of people in meetings.

According to a note from, Suhas’ office, the call centre has been able to assist migrant workers who are turning COVID-19 positive and provide them hospitalization. The note adds that the call centre is receiving at least 100 calls daily.

Meanwhile, as case numbers are rising across Kerala, strict restrictions have been imposed since April 26.

“Everybody is talking about lockdowns. In 2020, I was stuck here in Kerala during the lockdown. For a few days, food and shelter weren’t a problem. But it was that not a good experience. So, I don’t want to struggle here like in the past,” Nibir said.

“I am footloose labour. I am tagged with any contractor or employer. So, finding opportunities in this situation where there is no much work is also hard. So, like many others, I am also going back,” Nibir added.

Dr. Benoy Peter from Centre for Migration and Inclusive Development in Kerala, a grassroots migrant organisation, said that the migrant workers, especially the footloose ones, are in a fix now during the COVID-19 second wave.

“Based on the cases we receive, we can say that unlike the first wave in 2020, the infection rate seems to be high among the migrant workers this time, which eventually putting the workers in trouble,” Benoy said.

“The footloose labourers stay together. So, if one among them gets infected, then that one has to be isolated, which is a challenge for them, us, and the government. And even in the cases of migrants who stay with family, if one gets infected, they struggle to find an isolated stay. So, we can say that they all are in a fix,” Benoy said.

Benoy added that many are trying to go back because, for a migrant family, if one gets infected, it is hard for them to find isolation.

“Landlords are asking USD200 as rent for isolation for 20 days, which is unaffordable for migrants who are jobless for the last one month. So, many are trying to go back,” he said adding that many landlords are also trying to evict the migrant workers forcefully fearing that jobless migrants may fail to pay the rent.

During the first wave, when migrant workers were stuck here, the government has told the landlords not to evict workers from shelters. Eventually, many landlords had to own up the responsibility.

KA Mohanan, a building contractor for the last 30 years, said that his workers are leaving because of COVID-19 fears.

“Many are fearing infection. Additionally, some feel that they are unsafe here as immediate lockdowns may trap them here. Two of my workers are leaving tonight to their home states,” he added.

Elias TA, a plywood factory owner, said that he had around 200 migrant workers in 2019.

“In 2020, a few who went home didn’t return. Now, again a few have gone. I have only 120 workers now. With them, it’s impossible to run the factory, even when there are no many work orders,” Elias said.

The average daily wage in West Bengal is Rs 245, in Assam Rs 230, in Bihar Rs 210, in Uttar Pradesh Rs 216 and Rs 207 in Odisha, according to statistics provided by the Labour Bureau of the Indian government.

So, there are around 34.11 lakh internal migrant workers in Kerala from 194 districts across 25 Indian states/union territories who were working in Kerala during 2016-17.

Many cities have already imposed night curfews, lockdowns, and other restrictions to tackle the second wave. This has caused panic among the workers about losing jobs, lack of money, and transport like last year, where thousands of migrant workers walked back to their villages during the lockdown.

During the first wave and the lockdowns, according to the Indian Parliament, over 10.4 million migrants returned to their respective home states during the lockdown. Uttar Pradesh (UP) topped the list with 3.24 million, followed by Bihar (1.5 million) and Rajasthan (1.3 million).

Meanwhile, according to data compiled in 2020 by the SafeLIFE Foundation, a road safety NGO, it was reported that 198 migrant workers were killed in road accidents during the lockdown.