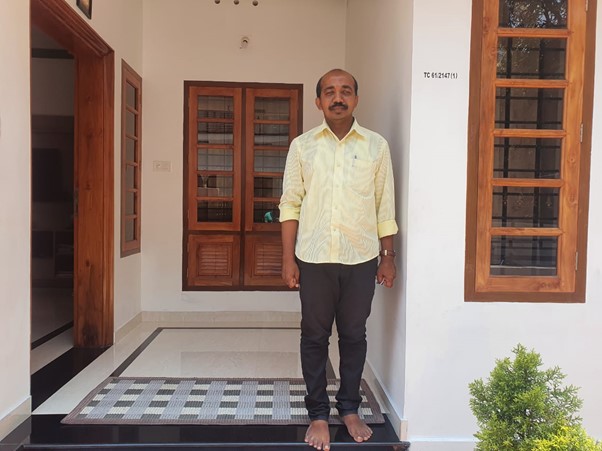 Christopher at his newly-built house in Vizhinjam, a coastal village in Thiruvananthapuram, Kerala, India, on March 20, 2021.

Chirstopher Shaji, a 46-year-old Indian civil engineer, is fighting a case in the UAE for his unpaid salary and other benefits after being laid off by his company. The company had cited fund crunch due to COVID-19 outbreak

If I fail my wage theft case in the United Arab Emirates, will I be able to fight the same here in India? India has signed many treaties with the UAE. Why can’t they sign a treaty to handle such wage theft cases too?

We know that India and UAE have collaboration in certain judicial matters. Why can’t they have the same in wage theft cases too?

Why can’t the Indian Ministry of External Affairs intervene? It’s not only my case, there are thousands of Indians laid off in a similar situation following the COVID-19 outbreak.

When I joined this company, it had some 13,000 migrant workers. Since 2017, following the death of one of its partners, it was falling into trouble.  And now, the company has only around 2,000 workers.

Majority to workers were laid off post-COVID-19. Poor blue-collar workers were forced to quit country after agreeing for 1/10th of their unpaid salary.

Almost all blue-collar workers had agreed for the company’s decision and left the country. A few are staying back in hope that they will get their unpaid salary.

In 2020 February, I came home (India) for an emergency. Unfortunately, as the lockdown was announced surprisingly due to the COVID-19 outbreak, I couldn’t travel back. At that time, my six-month salary was pending. After the complete lockdown was lifted, when the company restarted its operations in June 2020,  I worked online. And in July 2020,  when I flew back, I was told to resign.

I was surprised to hear that. They told me that company has suffered losses due to the COVID-19 impact and they are laying off workers.

I agreed. But they were not ready to pay my six-month pending salary and other benefits which were due. I disagreed with that. In August 2020, they served me a termination letter. I had no option other than approaching the court as the Indian embassy was helpless. I have been active in helping stranded workers. I know what can the Indian embassy do…

I was staying in a rented flat. I didn’t have money to pay the rent. Additionally, food also became a problem.

Till this February, I stayed there and returned as it was hard to stay there without money.

I have a loan of 20,000 USD.  I had built a house recently. Now, I am clueless about how to repay the loan.  I have two school-going children. My wife is a homemaker. I am the sole breadwinner. I have to find a new job somewhere else. I am trying. But everywhere the situation is bad.

Some days, I can’t even sleep. Joblessness and wage theft fight are haunting me. There are thousands like me. Will India able to find a solution?