Four of the Filipino activists who had been deported from South Korea where they were supposed to take part in alternative meetings parallel to the G20 summit in Seoul (10-11 November) called for a press briefing yesterday to publicly protest their deportation, critique the G20 and announce their next steps in their call for the Philippine government to take action.

Jess Santiago, the poet-musician and oldest in the group, was not able to come as he is still recovering from the physical harassment.  However, his cover of “Ah-chim ee-seul”  (Morning Dew), a popular Korean movement song, complete with a Filipino version and video recorded after the deportation, opened the event.  See http://vimeo.com/16609808 for the video. 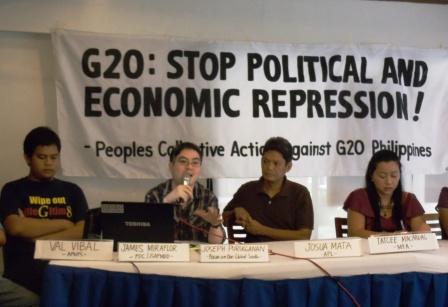 Josua Mata (Alliance of Progressive Labor) and Joseph Purugganan (Focus on the Global South-Philippines) spoke, respectively, on the labour and trade implications of G20 policies, especially on the Filipino people.

Tatcee Macabuag (MFA), for her part, spoke on the continuation of the exploitative “migration and development” agenda with the restructuring of the global economy as being pushed by the G20.

The press was informed that civil society organizations from the Philippines and other parts of the world are signing on the Collective Statement they have released on 8 November.

The deportees also revealed that a letter will be submitted to the Secretary of Foreign Affairs demanding that the government files a formal diplomatic protest.  They likewise welcomed President Noynoy Aquino’s instruction to “look into what really happened” as basis for filing a diplomatic protest.  Toward this end, however, the group also made known their plan to submit their personal affidavits to the President as input to the investigation; they expressed hope this act would be welcomed in the spirit of participatory governance.

Additionally, the deportees called for their de-listing in the blacklist of the South Korean government.

Representatives from the Freedom from Debt Coalition and Asia-Pacific Network on Food Sovereignty were also given time to share their analysis on the G20 Summit.

As of this time, 3 more Filipino women activists have been denied entry to South Korea.

We have also been informed that activists from other countries were not granted visas.  For more on this, please see Asian Forum for Human Rights and Development (FORUM ASIA) ‘s Open letter to the South Korean government on the deportation of seven Filipino activists at http://www.forum-asia.org/index.php?option=com_content&task=view&id=2642&Itemid=32 .