For immediate release/ Manila, 30 June 2021 — Migrant Forum in Asia (MFA) members and partners have together launched the second volume of the bi-annual analysis report, “Crying Out for Justice: Wage Theft Against Migrant Workers during COVID-19” which documents cases of wage theft from the period of January and May 2021.

The report marks the first anniversary of the Justice for Wage Theft campaign. A joint effort by a large coalition of trade unions and civil society organisations inaugurated on 1 June 2020, the campaign calls for an urgent justice mechanism for migrant workers repatriated due to the COVID-19 pandemic without being paid their due wages, salaries, and end-of-service benefits. More than a year after the pandemic, up to millions of migrant workers are still anxiously waiting for their wages, as there has been hardly any progress with respect to access to justice.

A total of 1,113 new cases were filed on the JWT-Uwazi platform during the reporting period. In terms of the locations where the cases occurred (country of destination), the United Arab Emirates topped the chart with 357 cases, followed by 252 cases in Saudi Arabia and 182 cases in Kuwait. Malaysia, the Philippines, Bahrain, Qatar, China and Oman each have between 18 and 95 cases.

Counting by countries of origin, 620 cases were India, followed by 200 from Indonesia, 116 from Nepal, 115 from Bangladesh and 62 from the Philippines.

SH, an Indian migrant worker, recalled his ordeal when he went to work for a household in Saudi Arabia September 2019. The recruiting agent told him he would be working as a driver for an Indian household. But upon arrival, he found out that he would in fact be working for a bakery run by an Arab household to do packing and cleaning. He tried to return home but failed, and was not paid months of wages since November 2020. He was forced to sign a paper which accused him of stealing 60,000 Saudi Riyals (US$16,000).

“I had no option but to do that and they took away my passport so I will not try to go home. I am very afraid that they might make false complaints against me and put me in jail if I try to run away,” said SH.

In an astonishing case recorded by a Nepali civil society organization, LG who worked as a domestic worker at a Saudi household for 10 years did not receive any wages and the employer barred her from returning to Nepal. She escaped to the shelter home of the Nepali Embassy, where she has been staying for three months. LG has no passport, no supporting documents, and she has no idea of her sponsor’s name.

In the previous launch of the first volume of the report, Nenette Motus, Regional Director of the International Organization for Migration (IOM) Asia-Pacific underscores: “There is a continued lack of access to justice mechanisms further revealed in this time of crisis. Undeniably, there is a need for increased, proactive, bilateral multi-stakeholder dialogue and collaboration to address such situations [of wage theft] underlined by the data we all collect, which we have the responsibility to collect.”

David Schilling, Senior Program Director of the Interfaith Center on Corporate Responsibility (ICCR) stresses the urgency of the situation: “This is urgent, this is not something we can put on an agenda for tomorrow, it is today.”

With thousands of migrant workers suffering from wage theft in the Asia region, the gravity of the issue across the globe is expected to be much more devastating in scale. Without proper procedures in place to document and monitor the grievances of migrant workers throughout the repatriation process, millions of cases of wage theft during the pandemic are predicted to go unaddressed. Moreover, migrants themselves are hesitant or refuse to report or file a case in fear of retaliation from employers and in fear of being unable to pursue new employment opportunities.

In the absence of an effective mechanism that will aid migrant workers in getting back their wages, they will only remain victims to an exploitative and unjust system that will continue to prevail in labour migration governance.

Access the second volume of the report series via this link: https://bit.ly/3hnrVHJ

Access the first volume of the report series via this link: https://bit.ly/3mLw6j1 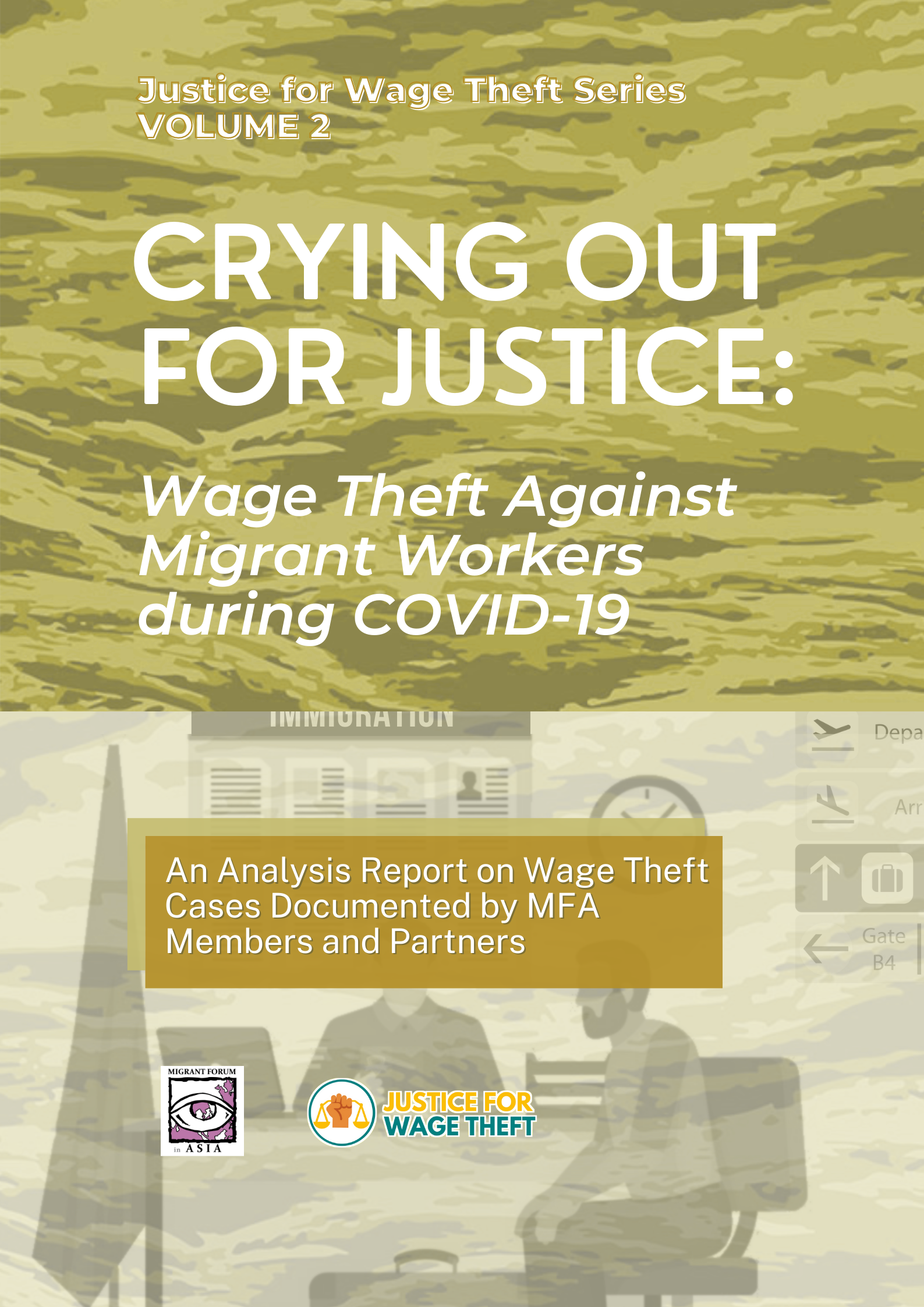