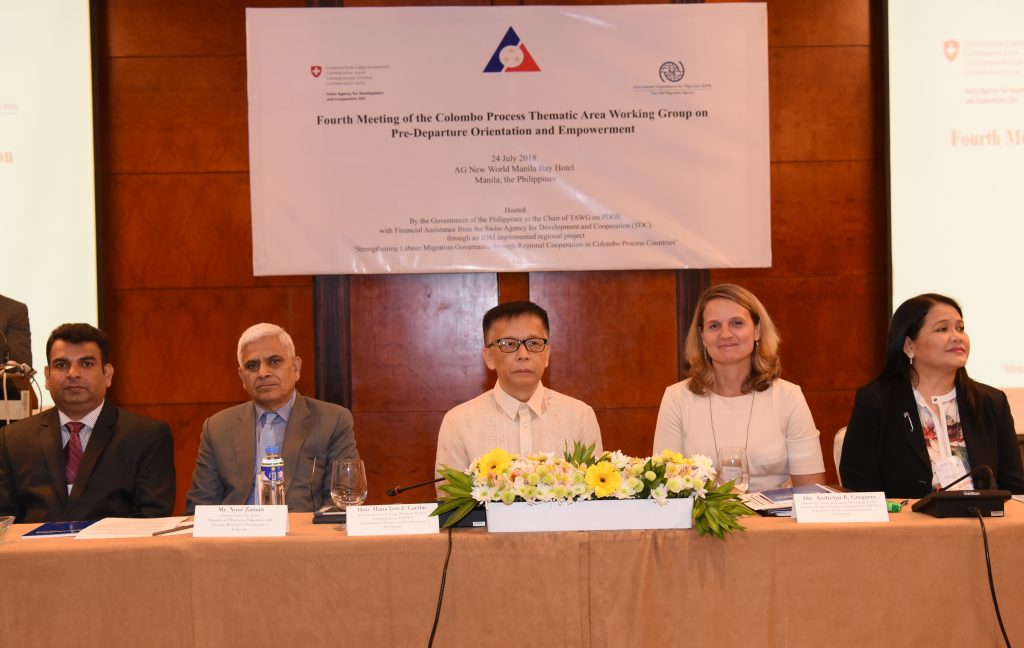 Delegates of the Colombo Process

The Fourth Meeting of the Colombo Process (CP) Thematic Area Working Group (TAWG) on “Pre-Departure Orientation and Empowerment (PDOE)” and TAWG on remittances was held from 24-25 July 2018 in Manila, Philippines. Migrant Forum in Asia was invited as a resource person for the program.

The TAWG on PDOEA’s goal is to create awareness through effective information dissemination for migrant workers and their families in order to empower them and make informed decisions to maximize the benefits of safe and regular migration. Building on the recently finalized GCM document, the Fourth Meeting will convene with the following objective:

i) to provide an avenue for the TAWG to engage in in-depth discussions on national, regional and global initiatives so as to make further progress towards TAWG goals; and,
ii) to discuss the possible alignment of the TAWG activities to the relevant objectives of the draft GCM with a view to contributing to the implementation of the GCM once adopted in December 2018.

Participants of the meeting included Senior Officials from the CPMS who are responsible for pre-departure orientation, empowerment and protection of migrant workers. Senior officials who are the focal points of remittances-related policies and regulations and initiatives on harnessing remittances for development participated in order to build synergies with “Remittances”, which is another thematic priority of the CP.

In line with this, Mr. William Gois and Mr. Rex Varona from the MFA Secretariat were invited as members of the Panel on 24 July 2018 to share their expertise on the GCM, migration issues, and remittance.

Mr. Gois discussed civil society perspectives on the role of the Colombo Process in empowering migrant workers. He presented four theories that aimed to resolve issues surrounding migrant workers. First, one of the key factors that applies to returning migrants is having options and alternatives in their country of origin. Migrants should be able to share about their experiences and provide their own perspectives on alternatives that would ensure a better upon return. Second, a whole spectrum approach (pre-employement, pre-departure, post-arrival) as support to migrant workers. Support systems such as community-based groups who are expats, a referral mechanism, and/or any access to people who along the lines would be there to support migrant workers who are in distress or crises, would greatly boost the morale of migrant workers.Third, the lack of access to justice is not a problem but rather it is their effectivity and efficiency that raises concern. For example, fees for translations of documents are out of range which makes it unavailable for most migrant workers who do not have the money. Fourth, mobility of migrant workers in the context of the Kafala system, translated as sponsor, ties employees to its employers. Mr. Gois proposed to see how within that system, there is mobility in terms of changing employers.

Mr. Gois said, “Information alone renders migrants helpless, it is not enough to provide them with information that they will need in their journey as migrant workers. It does not translate anymore to change or empowerment. The question now is “how do you empower migrants?” Migrant workers still needs to be accompanied by social workers and service providers to feel empowered in situation of distress.” Thus, there is a need for migrant workers to feel empowered even when alone. Already, information on awareness and empowerment is rapidly disseminated across all levels of society. One category that would lead to migrants’ empowerment is stability, more specifically, economic stability.

Subsequently, Mr. Rex Varona discussed the social protection mechanisms available to Filipinos. He mentioned that in the Philippines, there are 3 mechanisms on social protection namely Social Security System (SSS), Philhealth, and Pag-ibig which are all mandatory by law. However, most migrants drop out of this mechanism because of its inefficiency. For most migrant workers they participate by paying through Bayad Centers but these centers are not within reach.

In connection to Mr. Gois method to empowering migrants (economic stability) and the issue raised by Mr. Varona regarding the 3 mechanisms on social protection in the context of the Philippines, Mr. Varona introduced the concept of National Provident Savings Program (NPSP). The program provides one unified/consolidated, safe, secure, government-regulated/insured, universally accessible mechanism to build the migrants’ provident savings. The proposed National Savings Program aims to harmonize, synchronize, consolidate or create synergies among the various and existing savings and asset-building programs from governments, financial institutions, private sector and cooperatives, among others. The proponents of the program include migrant workers’ groups and the Migrant Forum in Asia.

For more information please contact William Gois of the MFA Secretariat at mfa@mfasia.org.

To know more about the Colombo Process visit: https://www.colomboprocess.org/

Please find below some photos from the program: