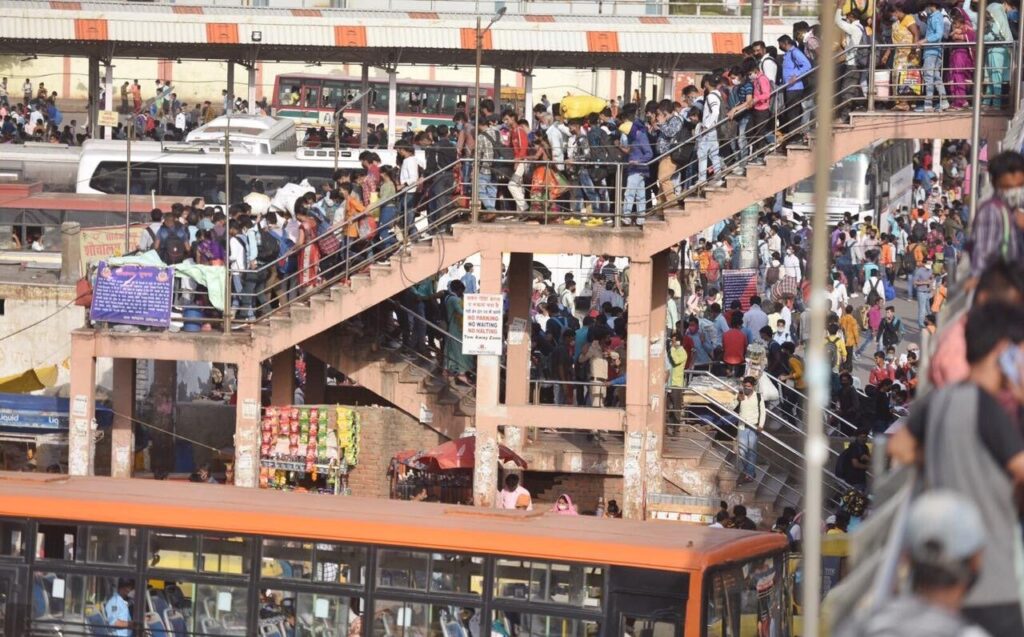 Based on the study in India, China, Indonesia, the Philippines, South Africa, and Kenya, a Chicago institute finds that if not imposed for long, travel bans can trap migrant workers in hotspots long enough to expose them to the virus and make them carriers.

When most of the Indian cities have imposed medium-duration lockdowns again to contain the second wave of COVID-19 spread, trapping millions of migrant workers in those hotspots, a new study claims that such mobility restrictions have resulted in increased infection rates in 2020.

Based on the data collected from India, China, Indonesia, the Philippines, South Africa, and Kenya, the study conducted by Chicago-based Becker Friedman Institute states that although very short and long restrictions limit the spread of disease, moderately lengthy restrictions substantially increase infections.

In India, the researchers studied the return migration out of Mumbai between March 2020 and August 2020, covering the first national lockdown and the subsequent unlock phases. The study also took into account the epidemiological data on the rise in infections in the home districts of the migrant workers.

Mumbai is one of India’s top migrant destinations. According to the 2011 Census of India, approximately 43% of Mumbai’s population originates from another state or district.

Many domestic migrants in India are employed in the informal sector and have limited access to the social safety net, low engagement with formal banking, and transient addresses. This made them particularly vulnerable to the economic consequences of India’s Covid-19 lockdown.

Millions of migrant workers lost their jobs and tried to return home from Mumbai, often walking long distances with little food. However, for fear that millions of urban migrants would return home and export infections across rural India, the government maintained a ban on domestic travel out of the city, including shuttering airports, trains, and buses.

According to the researchers, their findings suggest that policymakers should exhibit caution when initiating domestic travel bans if they cannot commit to sufficiently long restrictions.

Meanwhile, the head of the Indian health agency has said that as more districts are reporting a high number of infections, they should remain locked down for another six to eight weeks to contain the spread of the virus.

Balram Bhargava, head of the Indian Council of Medical Research (ICMR), said in an interview that lockdown restrictions should remain in place in all districts where the rate of infection is above 10% of those tested.

Currently, three-fourths of India’s 718 districts have what is known as a test-positivity rate above 10%, including major cities like New Delhi, Mumbai, and the tech hub of Bengaluru.

According to Reuters, Dr. Bhargava said that “the high positivity districts should remain (shut). If they come to 5% from 10% (positivity rate), we can open them, but that has to happen. That won’t happen in six-eight weeks.”

Referring to the capital, one of India’s hardest-hit cities, where the positivity rate reached around 35% but has now fallen to about 17%, Dr. Bhargava had said: “If Delhi is opened tomorrow, it will be a disaster.”

Shockingly, according to media, Covid-19 has declined in cities but a surge is witnessed in rural areas.

The Times of India has reported on May 12 that “In 13 out of the 24 states in India, cases are going up in small towns and villages. And in the rest of the 11 states, cases are growing faster in rural areas.”

Meanwhile, as a hint of reverse migration, a spike in MGNREGS, a rural employment guarantee scheme, is witnessed.

MGNREGS has surged 102 percent in April 2021 to 2.45 crore households from 1.21 crore households a year before. This demand is the highest during any April, ever since the data has been compiled from 2011.

MGNREGS guarantees at least 100 days of employment in a financial year to unskilled rural households at a pre-determined minimum wage rate.

Work for households and individuals are treated as separate categories under the scheme. Examples of household work are horticulture, sericulture, plantation, farm forestry among others. The state of Andhra Pradesh witnessed maximum demand in April with over 42 lakh households demanded work whereas Goa recorded demand for work from 159 households.

According to the data on the MGNREGA portal, there is a further 98 percent increase in demand for work by persons in April 2021 to 3.52 crore persons from a year earlier.

India is in deep crisis in the current wave of COVID-19 infections with around 350,000 cases and 4,000 deaths being reported daily.

On Wednesday, the World Health Organisation said that the “resurgence and acceleration” of COVID-19 transmission in India had several potential contributing factors, including “several religious and political mass gathering events which increased social mixing”.

The WHO, in its COVID-19 Weekly Epidemiological Update, published Wednesday, said that viruses in the B.1.617 lineage were first reported in India in October 2020.

“The resurgence in COVID-19 cases and deaths in India has raised questions on the potential role of B.1.617 and other variants (e.g., B.1.1.7) in circulation,” the update said.

Giving a global overview of the COVID-19 situation, the update said that the number of new COVID-19 cases and deaths globally decreased slightly this week, with over 5.5 million cases and over 90000 deaths.

“While India continues to account for 95% of cases and 93% of deaths in the South-East Asia Region, as well as 50% of global cases and 30% of global deaths, worrying trends have been observed in neighbouring countries,” it said.

The South-East Asia Region reported over 2.8 million new cases and just under 29,000 new deaths, a 6% and a 15% increase respectively compared to the previous week. This marks the ninth consecutive week the incidences of cases and deaths have been increasing in the region.