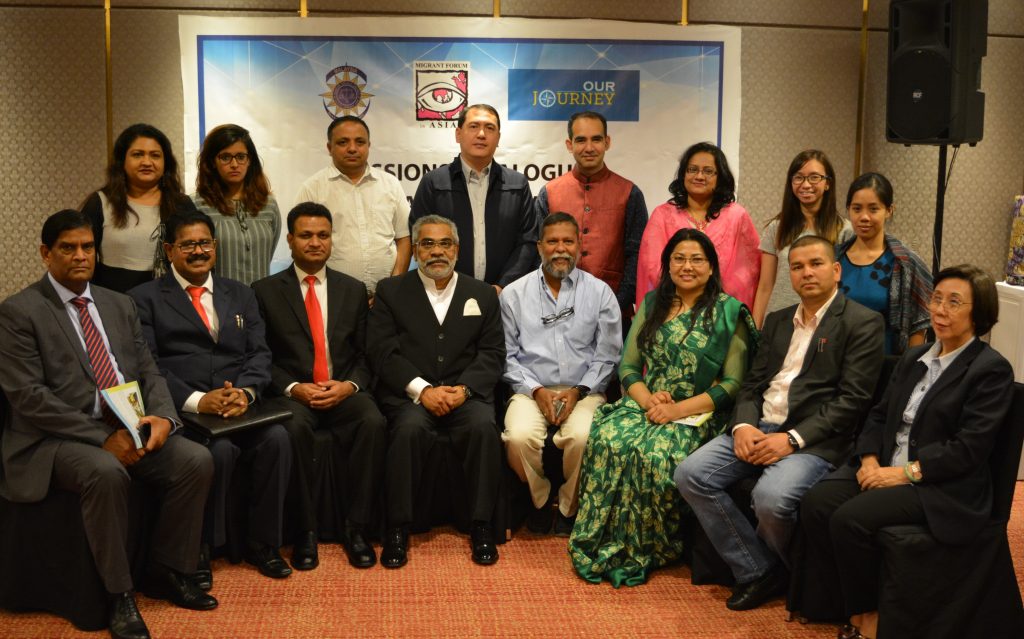 Migrant Forum in Asia (MFA) in collaboration with Our Journey Malaysia and Bar Council Malaysia organized a dialogue among Missions, members of parliament, and civil society on issues of migrant workers in Malaysia. The Dialogue was held in Kuala Lumpur, Malaysia on 8 March 2019.

MFA’s Missions Dialogue began in the Gulf Cooperation Countries (GCC) when MFA brought together missions of countries of origin as a learning experience and as a practice of collaboration with host country. The dialogue was continued in other countries of destination including among them, Malaysia. This is the third dialogue involving missions that MFA has organized in Malaysia.

Migrant Forum in Asia regional coordinator, William Gois emphasized on the need for collaboration and dialogue among stakeholders in addressing issues of migrant workers. He said: “Currently, the realities of the existing labour migration system is far too wide and contentious for CSOs to be involved at a large scale. Collaboration with stakeholders including members of parliament and missions can help change this system to be more humane and rights based. And so there is an urge to look at migration issues collectively as per the all of government and all of society approach. ”
Updates on upcoming policies changes on labour migration in Malaysia was presented by a representative from the Ministry of Human Resources:

Mission representatives discussed the challenges faced by migrant workers. Among the issues discussed were labour rights abuses in the workplace, the misuse of the levy, issues of undocumented migrant workers in the country, discrimination in wages and the lack of protection for migrant domestic workers. During the dialogue the need for countries of origin to work together was emphasized in order to prevent a race the bottom of the barrel where migrants’ rights are compromised. For fear of losing the market, many countries compromise workers’ rights in the negotiations for Bilateral Agreements (BLAs) and Memorandum of Understanding (MOU).

Representative of the Malaysian Bar Council, Dato Sri M Ramachelvam, spoke on Institutional Reform Committee in Malaysia as well as the proposed changes or the areas of focus by the Committee including multi-tier levy system, service providers, social security (SOCSO), and the right to redress.

Attending Members of Parliament (MP’s) spoke of developments or observations from their part – SUHAKAM on their Business in Human Rights programme, knowledge-sharing at managerial level, Nepal on political mobilization for change and their MoU with Malaysia, Exchange between Bangladeshi MP and Dato on the suspension of Bangladeshi migrants to Malaysia.

Recommendations brought forth relate to media engagement, social security investments to be borne by employers and government, occupational safety and health concerns and the related training, awareness, skiling.

For more information please contact William Gois of the MFA Secretariat at: mfa@mfasia.org

Please more photos from the program below.