Faal was delivering his talk in a webinar organized by Migrant Forum in Asia (MFA) and Lawyers Beyond Borders (LBB) on the topic “Alternatives to Dispute Settlements: Use of Technology in Accessing Justice for Migrant Workers.”

Faal, a visiting professor in practice at the London School of Economics, said that ODRs would help workers in the process of filing cases easy, enable para legal officials to assist the workers.

He also added that digitized documents in ODRs would help the aggrieved workers and their counsel in identifying malicious claims from the opposite side.

Expressing his concern over defining non-payment of wages as wage theft while seeking justice, Faal said that it may push the dispute to the criminal justice system where penalizing the defaulter will become the priority and compensating the migrant workers the second.

“However, he added that if there is a repeated offender on a wage theft case, then definitely criminal justice mechanism can be considered,” Faal said.

“Using technology can help to identify repeated defaulters and assess the volume of theft easily,” he said adding that AI and data analytics can be used too.

Faal was delivering his keynote speech in a webinar organized by Migrant Forum in Asia (MFA) and Lawyers Beyond Borders (LBB) on the topic “Alternatives to Dispute Settlements: Use of Technology in Accessing Justice for Migrant Workers.”

MFA had initiated a campaign in 2020 June seeking justice for migrant workers who have been victimized by wage theft.

According to MFA, wage theft consists of the total or partial non-payment of a worker’s remuneration, earned through the provision of labor services, as stipulated in a written or non-written employment contract.

Meanwhile, Sophia Kagan, Chief Technical Adviser of the ILO’s Regional Fair Migration Project in the Middle East (FAIRWAY), said that access to justice is a challenge in the Arab States, and political will is needed with technology aid to overcome the same.

“Technology, especially the multimedia elements, can help in streamlining grievance redressal process. Technology can also improve the access to information in workers’ language,” she said.

She also cited examples of certain kiosks and hotlines operated in the Gulf Cooperation Council countries put up to facilitate workers’ disputes.

Meanwhile, Subash Chandran from the LBB, said that countries of origin have a vital role to play in easing the dispute settlement mechanism for migrant workers.

“The migrant worker who has been sent back to his home country should be able to file a wage theft case through e-courts, exclusively set up for migrant workers, if he has been denied wages on repatriation,” he added.

During the Covid-19 pandemic outbreak, migrant workers were repatriated hurriedly by countries of destination and the migrants had neither the time nor the capability to access the judicial system  for claiming their dues.

Talking at the webinar, William Gois, the Regional Coordinator of MFA, said that looking for practical solutions to address wage theft is the need of the hour.

“We are moving in circles. We aren’t still getting to it,” he added.

After initiating the Justice for Wage Theft campaign in June 2020, the MFA had brought out two reports on wage theft.

This April, MFA and its partners had released the Crying Out for Justice Volume 1 report analyzing 1,000 wage theft cases, collected mainly from Arab Gulf countries, between November 2019 to January 2021.

In that report, based on the cases collected, MFA had said that among the countries of destination, migrant workers who were either working or have worked in Saudi Arabia have registered the highest number of cases of wage theft cases (292), accounting for approximately 41.5 percent of the total cases.

And in its second report released in June, MFA stated that more than 50 percent of migrant workers’ wage theft cases collected between 2021 January and May were from the construction sector.

“The largest number of cases of wage theft that have been registered were from the construction sector (59%). This was followed by the manufacturing sector (13%), domestic work (10.33%) and retail (4%),” the report titled Crying Out for Justice: Wage Theft Against Migrant Workers During COVID-19 Volume 2, read.

Between 2021 January and May, the MFA and its partners had collected 1,113 wage theft cases. Among them, there were 22 group cases and 175 individual cases.

On July 30, the Centre for India Migrant Studies, a partner organization of MFA, had reported that the wage theft of migrant workers from the South Indian state of Kerala, who returned during the pandemic from foreign countries would be approximately 170 million USD. In Kerala, out of the 1.5 million workers who returned from foreign countries following the pandemic outbreak, some 1 million had cited job loss as the reason for return.

And unfortunately, many who were the victims of wage theft were still fighting their cases with limited platforms and resources available in COOs. 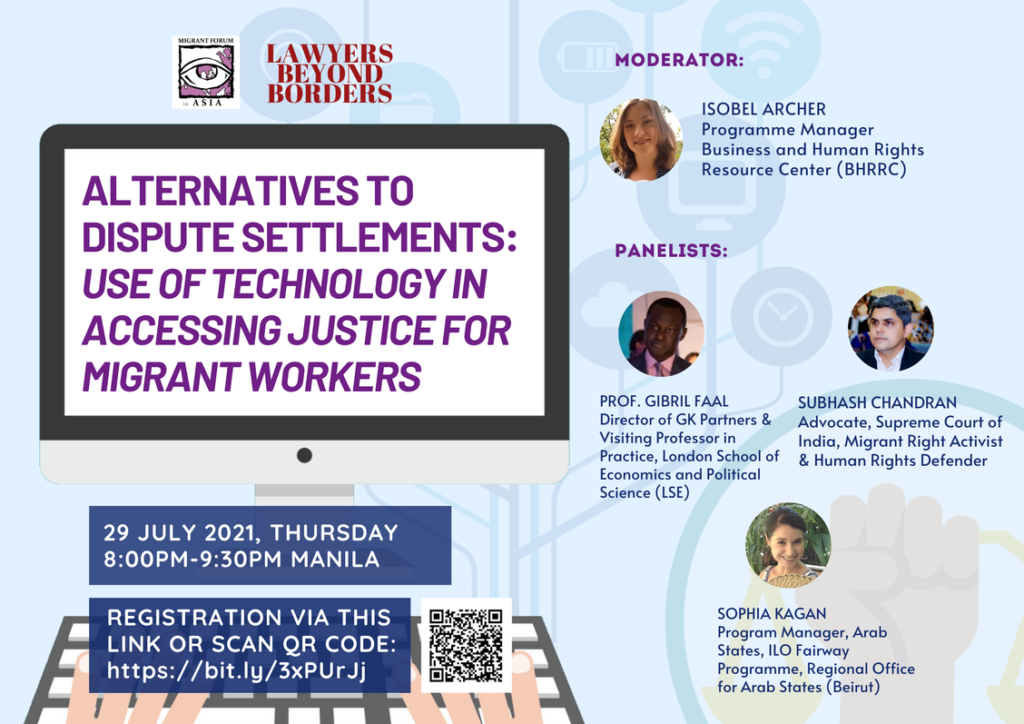